High inflation readings and a hawkish Federal Reserve continued to spook the fixed income and equity markets during the second quarter of 2022. The risk of recession is a distinct possibility as consumers have begun scaling back on purchases, mainly in goods and to a lesser degree in services, and dipping into savings to cover essential items such as groceries and gasoline. But what is the definition of a recession, and how do some experts predict its onset with such certainty? Let’s address the last question first. The answer is that it is impossible to know when a recession will start, so be wary of experts and their predictions.

The National Bureau of Economic Research (NBER) is responsible for placing dates on when a recession has started and when it has ended. Thus, a recession could technically end before the NBER confirms it even started, much like the pandemic-induced recession of 2020. According to the NBER, “A recession is a significant decline in economic activity spread across the economy, lasting more than a few months, normally visible in real GDP, real income, employment, industrial production, and wholesale-retail sales. A recession begins just after the economy reaches a peak of activity and ends as the economy reaches its trough.” One measure of a recession touted by the media is when the country’s Gross Domestic Product (GDP), or the value of the goods and services it produces, declines for two straight quarters. Some economists are predicting a decline in GDP for April-June 2022, which would mean two consecutive quarters of decline. However, the current job market is resilient, and unemployment is at its lowest rate in years. This robust employment is contrary to every recession since World War II, with each of those economic downturns experiencing a rise in unemployment. And, even if a recession has already started or will soon, many economists believe it will be short and relatively mild.

what does this mean for my portfolio?

The stock market is a leading economic indicator. It is too late to make drastic allocation changes or shifts in the portfolio to avoid the adverse effects of an economic decline. However, in anticipation of an eventual economic downturn, your BFA investment committee has re-positioned our client portfolios over the past few years. These shifts included a reduction in over-valued U.S. small-cap stocks in favor of Emerging Market equities with a value tilt. Value stocks tend to hold up better than growth stocks during a recession. Also, U. S. small company stocks are more sensitive to economic changes and have historically underperformed larger company stocks going into recession. We also picked up yield and thus boosted returns by increasing our allocations to U.S. High Yield Bonds and U.S. Real Estate (REITs). And, even though interest rates have picked up, your BFA fixed-income portfolio will benefit over the next few years from rising coupons as income becomes a more significant part of bonds’ total return. Finally, history has shown that the markets should fully recover from an economic downturn. 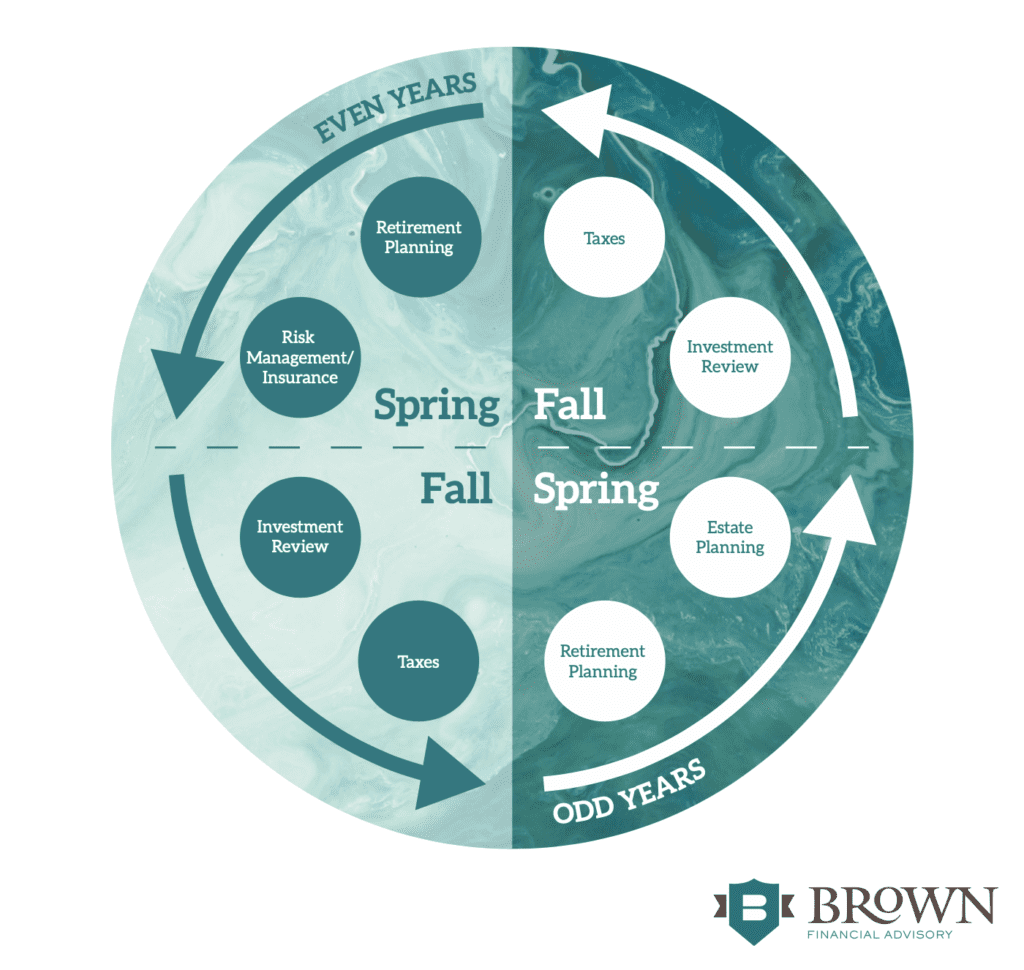 In a June 10th, 2022 article in Kiplinger Online, Rocky Mengle and Joy Taylor say, “Americans are facing a long list of tax changes for the 2022 tax year. Smart taxpayers will start planning for them now.”1 In fact, smart investors also use times of volatility to both reduce their taxes, now and in the future, and enhance their after-tax returns. During the fall semester of the True Planning Cycle (TPC), Brown Financial is laser-focused on providing tax planning strategies that provide both benefits to our clients. Here are a few notable methods you should expect during your upcoming tax review:

Tax-Loss Harvesting: During times of volatility, BFA begins to frequently and actively review portfolios for opportunities to capture tax losses. By selling positions that have declined and reinvesting the proceeds in similar (but not identical) investments, you can avoid future capital gains taxes and even write off an additional $3,000 per year from your ordinary income while remaining invested. So far, BFA has captured almost $4.5 million of tax losses, resulting in nearly $1 million in tax savings for our clients!

Roth Conversions: Roth IRAs provide tax-free growth and tax-free distributions throughout the life of the account, even after your heirs receive them. Unfortunately, most of us have more in traditional IRAs than in Roth IRAs. To “convert” a traditional IRA to a Roth, you must make a taxable distribution from the IRA that will raise your income taxes for the year. However, market declines create opportunities to buy into the Roth account while the market is low. Converting during market drops builds in a quick recovery of your taxes in a tax-free account. It may take a few years to break even on the taxes, but converting your Roth when the market is down can be a great strategy, especially if you are planning for multiple generations.

Avoid “Extra” Taxes: The IRS is sneaky, if you haven’t noticed. As evidence, there are three additional “taxes” that do not show up in the “brackets”: Net Investment Income Tax (NIIT = 3.8%), additional Medicare Taxes (0.9%), and Income-Related Monthly Adjustment Amount (IRMAA) for your Medicare Part B premium. Although none of these taxes fall within the tax “brackets,” they all apply when your taxable income exceeds certain thresholds. However, there are ways around these taxes, and strategies to avoid them should be part of your tax plan every year. As we run your analysis, we will consider the impact of these individual taxes on your overall plan and offer ideas to lower them, too. We will help you become one of the “smart taxpayers” Mengle and Taylor describe and help you save money in 2022 and beyond. We look forward to assisting you!

Are we the right fit?

How to choose a financial planner